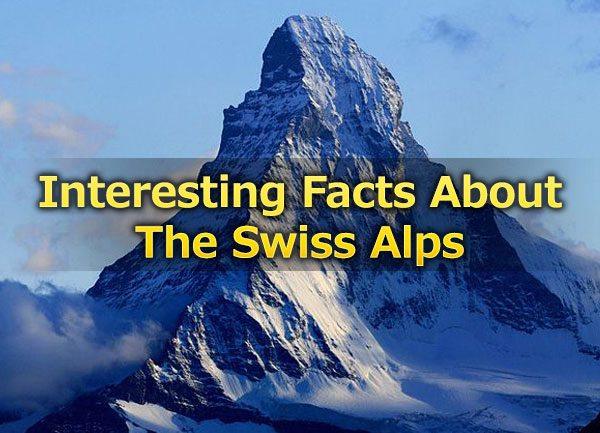 The Swiss Alps or simply the Alps, are Europe’s highest, greatest and most famous mountain range. It spans approximately 750 miles (1,200 kilometers) across eight nations: Austria, Italy, Slovenia, Germany, France, Switzerland, Liechtenstein, and Monaco. The high peaks and the grand, awe-inspiring views have made the Alps a popular tourist and sports destination, most especially among ski enthusiasts.  Thinking of heading to the Alps?

To be better prepared for camping in the mountains, the 99camping.com website has some useful resources and you should read the following exciting facts as well about the Swiss Alps: The Lechtal Alps are the biggest mountain chain of the Limestone Alps and Eastern Alps. Located at the south of the Austrian/German border, they are named after the Lech River that flows northward into Germany. Like the surrounding mountains, the Lechtal Alps consist of the majestically formed peaks and diverse rock appearance and structure. The highest point is the Parseierspitze, which is the only “3000-er” of the entire North Limestone Alps (at 3,036 feet). Matterhorn – At the Border Between Switzerland And Italy

The famous Matterhorn is a pyramid-like mountain rising 4,478 meters (14,692 feet) from the base. It borders between Switzerland and Italy and is the twelfth highest peak in Western Europe. The Matterhorn’s majestic appearance makes it a popular tourist destination, plus several skiing resorts dot around the region. Mont Blanc (“white mountain”) is the highest peak in the Alps and of the whole European Union, rising 4,810 meters (15,780 feet) above sea level. It borders between France and Italy. Zermatt, a Swiss municipality of 5,700 people, has a high altitude which makes it popular throughout the world as a ski destination. What you see in this image is a 3,900-meter (12,795 feet) ski area on the Breithorn plateau. The Speikboden is a mountain in Italy, located in the Zillertal Alps – a Central Eastern Alps mountain range bordering Austria and Italy. Also, there are a lot of ski resorts in the area. The Lauterbrunnen valley is considered one of the deepest valleys in the Alps when considering the huge mountains that rise on both sides of the land. The valley owes its present appearance to the glacial erosions or several waterfalls from where the valley gets its name. The village there is also called “Lauterbrunnen”. The alps have been the source of many minerals and crystals, which includes copper, iron, cinnabar, quartz, and amethyst. Other lesser-known minerals are also found in the Alps including pink fluorites, hematites, dolomites, and titanites. The Aiguille du Dru belongs to the Mont Blanc massif of the French Alps with the highest point being Grand Aiguille du Dru at 3,754 meters (12,316 feet). The name derives from the French word “aiguille” meaning “needle,” which explains the peak’s rather pointy appearance. The Swiss Alps can be seen in Austria, Italy, Slovenia, Germany, France, Switzerland, Liechtenstein, and Monaco – These countries are known as the “Alpine States.” 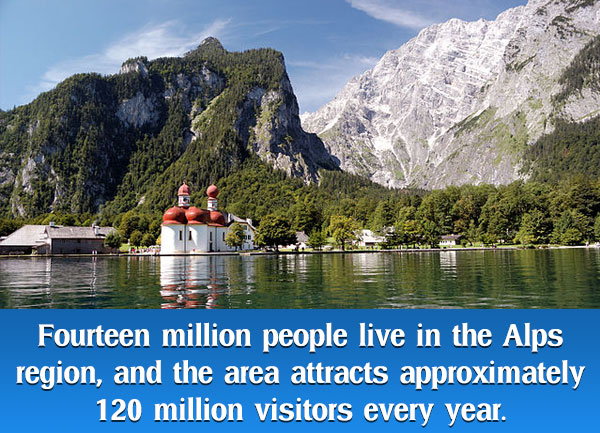 There is only a population of fourteen million in the Alps region, but this area attracts approximately 120 million visitors every year! No wonder, tourism is the top and intrinsic part of the Swiss economy! The Destruction Caused by The Avalanches on The Alps

Between 40,000 to 80,000 men died in World War I due to the avalanches on the alps. Many of these avalanches that brought the soldiers to their deaths were caused by the artillery fire. Since 1865, over 500 people have died trying to reach the Matterhorn’s summit due to a variety of factors: inexperience, poor-quality gear, bad judgment, and weather, among others. Home to Many Glaciers The Gran Paradiso is a mountain in the Graian Alps, situated between the Aosta Valley and Piedmont regions of North-West Italy. It has an elevation of 4,061 meters (13,323 feet), making it the seventh highest peak in the Graian Alps.