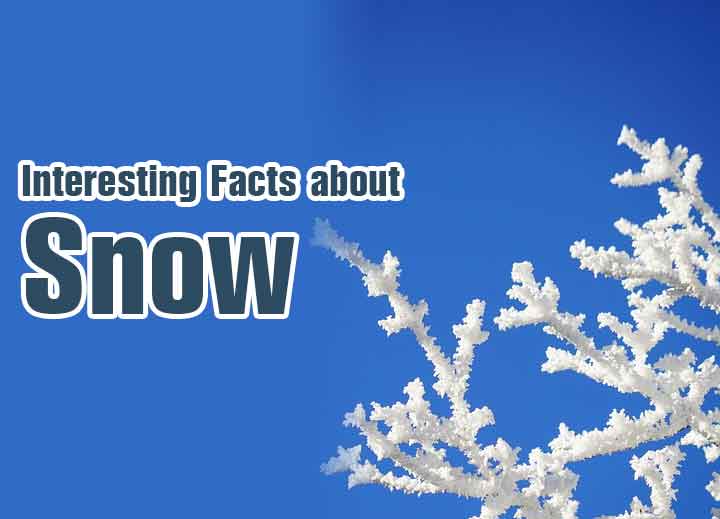 Whether they love it or hate it, snow will be a big part for a lot of people. Here are some interesting and intriguing facts about snow that you probably didn’t know! Snowflakes can be Identical

The common notion that no two snowflakes are the same was finally disproved in 1998, when a scientist chanced upon two identical snowflakes, from a storm in Wisconsin. Still, it’s pretty amazing to think of all the snowflake designs out there!

Some may think that snowflakes are the only way in which we get snow. However, there are other ways in which we can get a snowy landscape. The other forms of snow are sleet (ice pellets) and graupel (which is often confused with hail, but it actually consists of snow pellets).

The Color of Snow

Snow might look white when it’s in a concentrated form, but it actually has no color. In other words, snow is translucent. This means that the light does not pass through the snow but is instead reflected. This reflection off the snow’s surface gives it that white appearance.

It might look like snowflakes are piling up quickly on the ground. However, the speed of the snowflake fall isn’t that constant. It usually starts out slow, with the updrafts sometimes causing the snowflake to fall to slow itself down, completely halt, or even rise for a while. On average, though, snowflakes usually fall at a speed of about 3.1 miles or 5 kilometers per hour.

The largest snowflake ever found had a diameter of about 1.5 inches. In addition, this particular snowflake was also 8 inches thick. The Guinness Book of World Records listed this giant snowflake as the biggest one yet. It was found at Fort Keogh, Montana in 1887.

The record for the largest snowfall in the world used to be in the United States, at 75.8 inches. This occurred in Silver Lake, Colorado, in April 1921. However, this previous world record is now edged out by the municipality of Capracotta, Italy, which received an even more enormous 101 feet of snow piled up over an 18-hour period, on March 5, 2015.

What’s even more surprising is that Capracotta is located in southern Italy, which is quite some distance from the Alps. But the town, which sits at 1,421 meters (4,662 feet) on sea level, has been known to experience enormous snowfalls on a good (or bad) day.

Every snowflake may not be unique, but they all are believed to have six sides. The reason behind this phenomenon is the molecular structure of the snowflake. Each of the molecules in these ice crystals consists of an oxygen atom and two hydrogen atoms. When fused with one another, they always form a hexagonal shape.

The Fear of Snow

Chionophobia is the term given to fear of snow. This derives from the Greek words chion (“snow”) and phobos (“fear”). The opposite is “chionophilia,” an obsessive love towards snow.

Most Snow in a Day

Colorado is also the record holder for the most snow to fall in one day. 63 inches of snow fell in the city of Georgetown, Colorado, on December 4, 1913.

Each year, about 105 snow storms affect the United States, with snow spreading to several states at a time. Each storm can be expected to last for around two to five days on average.

Among the 10 biggest snowstorms in US history are the Great Blizzard of 1899 (eastern US), The Great Lakes Storm of 1913 (Great Lakes Basin), The Knickerbocker Storm 1922 (upper south and middle Atlantic), The Armistice Day Blizzard 1940 (in the Midwest) and the “Snowmageddon 2010” (Midwest and the East Coast), among many others.

Permanent snow and ice cover about 12% of the land surface on Earth. The majority of the ice-and-snow-covered areas are the polar regions (North and South Poles).

The above items can certainly help make your winter a very comfortable one. If you’re not sure about which one to go for first, allow us to recommend the OZERO Winter Work Gloves. According to reviews, these are easily the warmest gloves most people own. Fingers are often vulnerable in cold regions, so have a pair on hand for slipping on at all times.