For the tired and weary spirits, there’s nothing like a road trip alone. Being far away from everyone and everything that stresses you out can be a soothing and relaxing experience. But if you’re up for a thrilling adventure that will take your road trip danger difficulty level to eight notches higher, nothing beats traveling these tricky roads up on the mountain sides (given that you have no fear of heights). Here are some of the world’s most dangerous mountain roads: Also known as the “Death Road,” the North Yungas Road was dubbed as the “world’s most dangerous road” in 1995 by the Inter-American Development Bank. It’s a 65 km long road that connects La Paz and the town of Coroico in Bolivia. During the 1990s, 200-300 people were reportedly killed every year. It has been a regular occurrence for trucks and buses to go tumbling to the valley below whenever they try to pass each other on this thin road. Cross markings on many spots where vehicles have fallen have been put all over.

The good news is all travelers that need to pass through don’t have to travel that dirt road anymore because an alternative route was opened in 2006. However, it is still open for adventure cyclists, so the risk certainly remains there. The Guoliang Tunnel is carved along the side of and through the Taihang Mountains of the Hunan Province in China. The local villagers took five years to finish the 1,200-meter-long tunnel using hand tools so that people living pass the village can have access to the outside world. When it was finished in 1977, the tunnel was opened to traffic.

Because the road is four meters wide, five meters high and has open edges, it was given the nickname, “the road that does not tolerate any mistakes.” The tunnel’s 30 “windows” provide views off the cliff to a tumbling abyss. One of the world’s highest and most punishing roads, the Sichuan-Tibet Highway is a 2,412-km-long road where rock avalanches and landslides are common. It traverses 14 high mountains, spans dozens of rivers and crosses forest and many dangerous places. The road has a record of over 7,500 deaths for every 100,000 traveling its rocky paths – a pretty good reason why you need to use extra caution while driving here. It is recommended for poor weather drivers to steer clear of this road, or bring a better driver instead.

Regardless of bombing occurrences and threats of the insurgency as it runs through the Taliban territory, the Jalalabad–Kabul Road will still be one of the world’s most dangerous roads because of its narrow, winding lanes that climb up to 600 meters through the Kabul gorge. Add to that the drivers that recklessly try to overtake oversized freight trucks that can’t move fast while climbing thousand-foot hills. Trucks get stuck and fall back, causing drivers stuck up behind them to pass through, leading to car crashes, one after the other. The highest paved road in the world, the Karakoram Highway can take you across the Karakoram mountain range through the Khunjerab Pass at an altitude of 4,693 meters. It is named the “Friendship Highway” as it connects China and Pakistan. It’s also the road to pass to reach the peak of Masherbrum, the world’s hardest alpine climb.

The road is a tourist attraction as it passes through spectacular canyons along the old Silk Road and gives a stunning view of the K2 mountain and other peaks from the pavement. But it’s prone to landslides and drivers here can easily suffer altitude sickness. Plus, the road in Pakistan is still unpaved. The Skippers Canyon Road is a 22-km-long stretch of land that is 25 minutes away from Queenstown, New Zealand. It was built by Chinese laborers in 1862 after shepherds discovered gold in the Shotover River. The road hasn’t changed much, and in most places, it is too narrow for cars to pass each other. Driving this path requires a special permit, and if you do manage to secure a permit, be ready for a challenge for there are no guardrails on this cliffside road. While fatalities have been few, drop-offs into its ravine below are so dangerous, so a huge amount of concentration is needed when you’re maneuvering in it. The nine-kilometer road strolls over the western section of the Himalayan mountain range, connecting Ladakh and Kashmir Valley. The Zoji La Pass, or simply Zojila, keep the people of Ladakh in touch with civilization, but it is often closed during winter due to heavy snow. Having no barriers and being up there in an elevation of around 3,528 meters, you need to be extra-careful while traversing this rocky road. You better watch out also for livestock walking on the road. The Halsema Highway traces a meandering path crossing the Central Cordillera mountain range in the Philippines. The road is approximately 150 miles long, mostly unpaved, and its highest point is 7,400 feet above sea level. Like many under-maintained roads on mountains, the road is prone to landslides where big stones tumble from peaks. It also transverses many foggy cloud forests that could come up at any turn. During the rainy season, the road becomes muddy and almost impassable. If you like to experience a high degree of isolation during a road trip, the Dalton Highway is the road for you. The 667-km strip of land begins at the Elliot Highway and ends at Deadhorse near the Arctic Ocean and the Prudhoe Bay oil fields. At first glance, the highway looks serene and safe, but it is actually filled with potholes and small flying rocks are carried by fast winds. And because it is in the middle of nowhere, bring food and survival supplies because there are only three villages along this road through the wilderness. 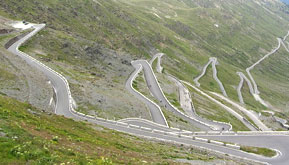 Although Stelvio Pass was voted by Top Gear as the best driving road in the world in 2008, it is also known to give drivers trouble. The 2.7-km road is one of the highest paved mountain passes in European Alps — more specifically, it is the highest in the Eastern Alps. Over the hills, it looks like a child’s scribble. It has 60 sharp 180-degree corners that could spell disaster if you’re running a little bit fast. The road has a low concrete barrier that enables you to see the steep mountain drop, so it’s best not to look down.