Mines are a significant contributor to a country’s economic growth and status. Despite some environmental issues and concerns, mining is still a thriving industry worldwide. Mining is, first and foremost, a source of mineral commodities essential for maintaining and improving their standards of living. Mined materials are used to construct roads and hospitals, build houses, automobiles, make computers and satellites, generate electricity, and provide the many other goods and services people enjoy.

If you ever visited a mine, you were probably quite impressed by its vastness. Here are the largest mines in the world.

West Papua (Indonesia) is an impressive mine with a concession area of more than two thousand square kilometers, about Lima, Peru’s total surface area. However, the pit areas reach approximately 100sqm.

Grasberg Mine was discovered in 1988. Forbes considers it one of the largest mines on the planet today. The mine produced 83.9 tons of gold in 2018 and is the second-largest copper mine in the world, with 750,000 tons produced per year.

Mponeng Mine in the southeast of Johannesburg is the deepest mine in the world. Gold has been extracted since 1886. Its depth reaches 4200 meters. Over 4,000 miners descend daily to this mine, with temperatures averaging at sixty degrees centigrade and a 95% humidity level. It takes 90mins to descend at the maximum speed of the lift is 64.3 kilometers per hour.

Bingham Canyon copper mine is in Salt Lake City, Utah. This is a property of Rio Tinto Group and operated by Kennecott Utah Copper Corporation, a subsidiary. One of the oldest active mines in the US that started its production in 1906. It led to creating a well that is almost 1 kilometer deep, more than 4 km wide, covering 770 hectares of land. In 1966, it was declared a US national historical monument. 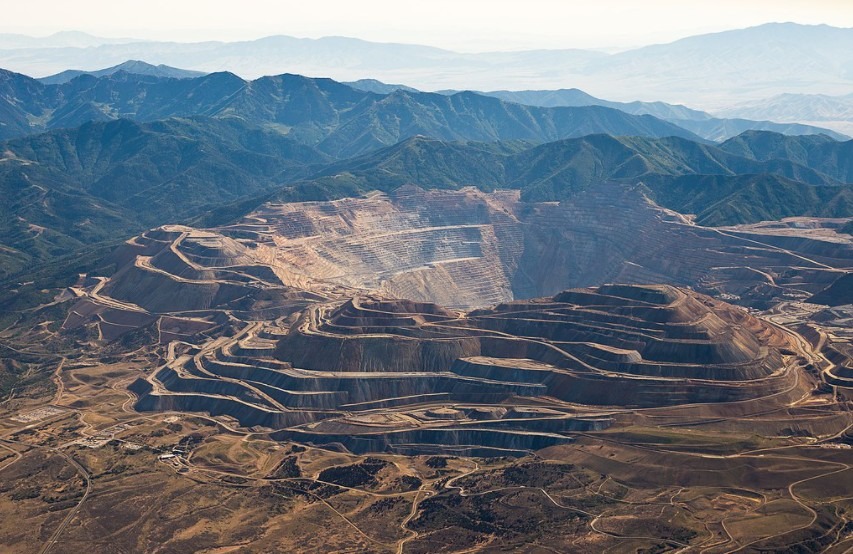 Diavik’s diamond mine produces more than 8 million carats per year, one of the most spectacular mines on the planet.

This is an old inactive but impressive diamond mine. It’s gigantic enough with 525 meters deep and a diameter of over 1,200 meters. Helicopters are prohibited from going over or near its crater due to the strong air currents gust towards the mine’s interior, causing accidents.

Chuquicamata, or known by the locals as “Chuqui,” is the biggest open-pit copper mine by excavated volume. The pit is in the north of Chile. Codelco, the Chilean state enterprise, owns and operates the mine.

This mine is in Khanbogd (Mongolia), within the Gobi Desert; this combined open pit and underground mining project were discovered in 2001. It joins institutions like Turquoise Hill Resources, Rio Tinto, and the Government of Mongolia. Oyu Tolgoi is the biggest financial mining project in Mongolia’s history.

In Northeastern Nevada, this active gold mine has 1,379 employees and is managed by the giant of the mining industry Barrick Goldstrike Mines. This deposit has three divisions: the large open-pit mine Betze-Post and the two underground mines Meikle and Rodeo.

Northern Pery’s mine, the Yanacocha, is the second-largest gold mine in the world. The open-pit has a 251-square kilometer. Newmont Mining Corporation, together with Buenaventura, a Peruvian company, runs the mine.

Located in north-west Queensland, Australia, this mine produces silver and lead were discovered by Broken Hill Proprietary Company (BHP) in 1990.

In Lapland, the Kiruna mine is the largest and most modern underground iron ore mine globally. This is managed by Luossavaara-Kiirunavaara AB, a Swedish mining company. With its underground jaw crusher, the mine has an ore body 2.5 miles long, 260 ft to 390 ft thick, and reaching a depth of up to 1.2 miles.

Carajás mine This large iron ore mine is in the state of Para, in the Carajás Mountains, in the region of Northern Brazil. It also produces gold, manganese, copper, and nickel besides iron. It is owned by the Companhia Vale do Rio Doce and is primarily powered by hydroelectric power from the Tucurua­ Dam.

Orapa, or “the resting place of lions,” is a massive diamond mine in Botswana, about 150 miles west of the city of Francistown. It is owned by Debswana, a partnership between the De Beers company and the local government.

The pit, also called “the super pit,” is in Western Australia’s Goldfields-Esperance region. It is also known as Kalgoorlie-Boulder gold mine. The town around this mine was founded during the Yilgarn-Goldfields gold rush in 1893.

This is a copper mine in the Atacama Desert in Chile. The Escondida deposit is part of a cluster of porphyry coppers scattered through a vast area that is hundreds of miles long.

The Udachnaya, meaning “lucky pipe,” is Russia’s one of the largest diamond mines. It is in the Sakha Republic and has estimated reserves of 225.8 million carats of diamonds, with an annual production capacity of 10.4 million carats.

This mine in south-central British Columbia (Canada) is rich in copper and molybdenum mineral concentrates, including trace amounts of silver and gold. Teck Resources own this mine.