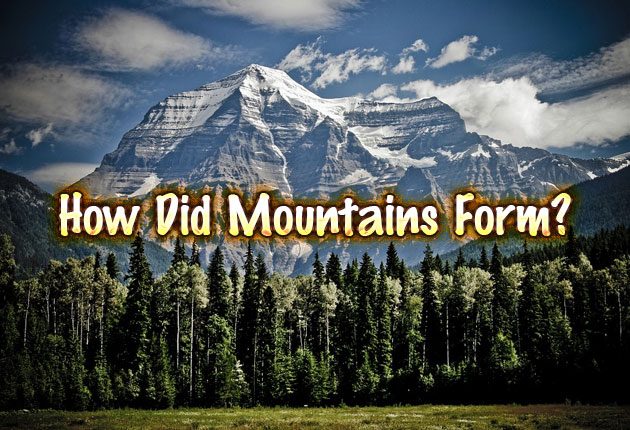 It’s always a good feeling to behold the majestic beauty of a mountain. When you’re feeling stressed out with life, a climb to a mountain range would help you feel better, saner and more relaxed. Seeing the beauty of the earth from a mountain top gives you a better sense and appreciation of life itself.

Our ancient ancestors even believed that mountains were something spiritual. They thought it was the home of the gods or a place to get closer to God. Some even worshiped the mountains as they believe it were a god.

For today and for centuries ago, we cannot deny that there is just something about these tall, beautiful formations of land and rock that stir the soul. But thanks to geology, we now know they’re not gods.

Simply put, a mountain is a result of tectonic forces, but not all mountains are formed the same way. The question of how are mountains formed depends on the type of mountain: fold, volcanic or block mountains. All of these are the outcome of plate tectonics that push the rock upward, creating a land form that is higher than the surrounding land. Most mountains in the world are fold mountains – they are vast mountain ranges stretching hundreds or thousands of kilometers across the surface of earth They are formed when two tectonic plates collide head-on at a convergent plate boundary, causing an over-thickening of the crust. The less dense crust float on top of the denser crust, with huge slabs of rocks being pushed up into the air to form mountains, while a greater volume of material is forced down to the mantle.

Some of the renowned fold mountain ranges include: A similar form of the mountain, volcanic mountains, or simply volcanoes, are created when a tectonic plate is pushed beneath another, where magma is pushed up to the surface from below the crust. When magma erupts as lava, rock, ash and volcanic gases build up around the volcanic vent to form a mountain. If the magma breaks through the surface, it forms a volcano.

Some of these volcanic mountains include:

There are times when the magma reaches the surface, it just cools and forms hard rock. The source of magma goes away and the rock hardens to form a dome shape. The softer rock above it eventually erodes, creating a circular mountain range. Examples of dome mountains are Mount Saint Helens and Navajo Mountain in the United States, the Chaitén lava dome in Chile, and Torfajökull in Iceland. Mountains can also be formed along natural fault lines. These are called block mountains, which are created when faults in the crust cause rocks to move past each other. Unlike the plate collision that happens with fold mountains, the crust breaks up into chunks and move up or down, resulting in one plate lifting up and tilting over. The uplifted chunk of land become block mountains or horsts, while the dropped blocks become depressed regions called graben. Usually, block mountains have a steep front side and a sloping back side.

Some of the renowned block mountains include: